It is often said that many people are resistant to change and unwilling to step out of their comfort zone. They like doing things the way they have always known. This applies to organisations as much as to individuals and invariably the result is lack of progress and reduced efficiency.

According to Spitz, most in-house departments are organised in the same way: teams of IP specialists, including attorneys and support staff, dealing with everything from searching and clearing new marks to filing, protecting and enforcing them. They typically deal with numerous jurisdictions and a “multitude of tasks”, he says.

“What most don’t have today is business-orientated key account management—they don’t engage with the business as much as they could, as typically they are first and foremost IP experts who are buried, by choice or lack of it, in administrative work,” says Spitz, who argues that this approach is very expensive to operate as it involves full-time employment of highly skilled professionals who, for one reason or another, “don’t add value to the organisation in the way that they could”.

At the same time, he notes, these departments are easily overwhelmed by events that require scalable capacity; do not follow modern process management practices; do not make best use of technology; and, as a result, are not as efficient or effective as they could be.

The need for change also comes after an “enormous increase” in the complexity of how trademark professionals fulfil their responsibility to protect brand assets, says Spitz, while at the same time business leaders are demanding more effective and proactive advice more quickly and with greater transparency regarding costs, as the pace of business accelerates.

He adds that in-house lawyers increasingly need to know not only about trademarks and designs, but also about domain names; data protection; online trading; copyright; and the full spectrum of IP laws, regulations and remedies. IP assets are also being protected in an ever wider range of jurisdictions, including emerging markets where IP and legal systems are less developed. At the same time, Spitz says, budgets are contracting while IP portfolios are expanding and yet often they must be handled by the same team who are then even less able to manage the workload.

With all this in mind, he discusses his proposal for change, one that he acknowledges is “radical in a few aspects”. It is essentially a four-layer vision, starting at the very top with trademark departments implementing “effective key account management”.

The first layer involves “taking care of clients” and releasing in-house people to spend time with their commercial colleagues, developing their skills as ‘counsel’ rather than as technical and procedural specialists. He also emphasises the importance of what he calls “competitor mapping” where trademark departments actively monitor and assess their rivals’ activities and performance.

The second layer involves transparency and control over costs. Spitz has pioneered “professional agent fee benchmarking” whereby departments can assess what they are paying their agents against market rates. “Lots of agents and service providers are unfortunately applying mark-ups or incorrect exchange rates, so there needs to be a mechanism for benchmarking agents’ fees and charges.”

Departments should also be looking at alternative fee arrangements, eg, agreeing on flat fees for certain services, which at the moment are mainly charged for on an hourly basis, according to Spitz. “Finally on fees, there needs to be professional invoice control—at the moment most invoices are just paid regardless.”

The third layer concerns the operations of a trademark department, which need to be improved through process automation and use of purpose-built platforms, Spitz claims. “More work needs to be shifted onto more shoulders” (such as local agents), he says, with these people doing basic but important administrative work that many IP departments do themselves at the moment, such as docketing.

“New approaches, such as combined name creation and clearance (commonly separate services, leading to more costs) need to be employed. New ways of handling trademark searches need to be tested and implemented. The market is not standing still and we are among the few that are constantly innovating to respond to changing needs,” Spitz explains.

In the final layer, which Spitz calls “professional agent management”, he says that local agents should not just be instructed, but managed; and there is an important difference between the two, he says. IP departments expect their local agents to provide them with proactive and valuable advice once they are entrusted with a certain task. However, very rarely do IP departments invest the time necessary to explain to local agents exactly what is expected of them; how the client organisation works; and what should be done to meet the client’s needs. Also, few if any IP departments systematically track the service quality of individual attorneys and firms over time and so have no means of carrying out meaningful periodic assessments of performance.

According to Spitz, under his model for change, which could take between one and three years for any given company to implement, not only would the business benefit but also the trademark team.

“By structuring the operation in a more process-orientated way, teams are more motivated and satisfied. Once local agents are managed properly and know what is expected they also become more effective.”

The big question is whether trademark departments are willing to implement change. Spitz recognises the barriers. “At the moment, for many, things are sort of working, and change itself places additional demands on people who are already so busy.”

Another problem is the lack of communication among peers, he says, with many unaware of the positive outcomes that some others have achieved through deliberate change.

“What’s missing is an open exchange of ideas among peers and evaluation of existing solutions to identify best practice and so develop an industry-wide standard; everybody is doing things differently at the moment and there is widespread under-performance against what some are achieving for their businesses.”

Spitz says some large corporations have installed legal operations managers responsible for looking into how departments can bring about meaningful change. “We have been fortunate enough to work with clients who are ready for change and we have been honing our service offerings over several years to meet current and future demands of modernising businesses” says Spitz. “This is an interesting time for everyone in legal services and no less so than in the world of trademarks”.

Do trademark departments have what it takes to change, and do they need to? Only time will tell. Background
This article explains what exactly agent benchmarking is, with a particular emphasis on standard trademark and patent services. It... 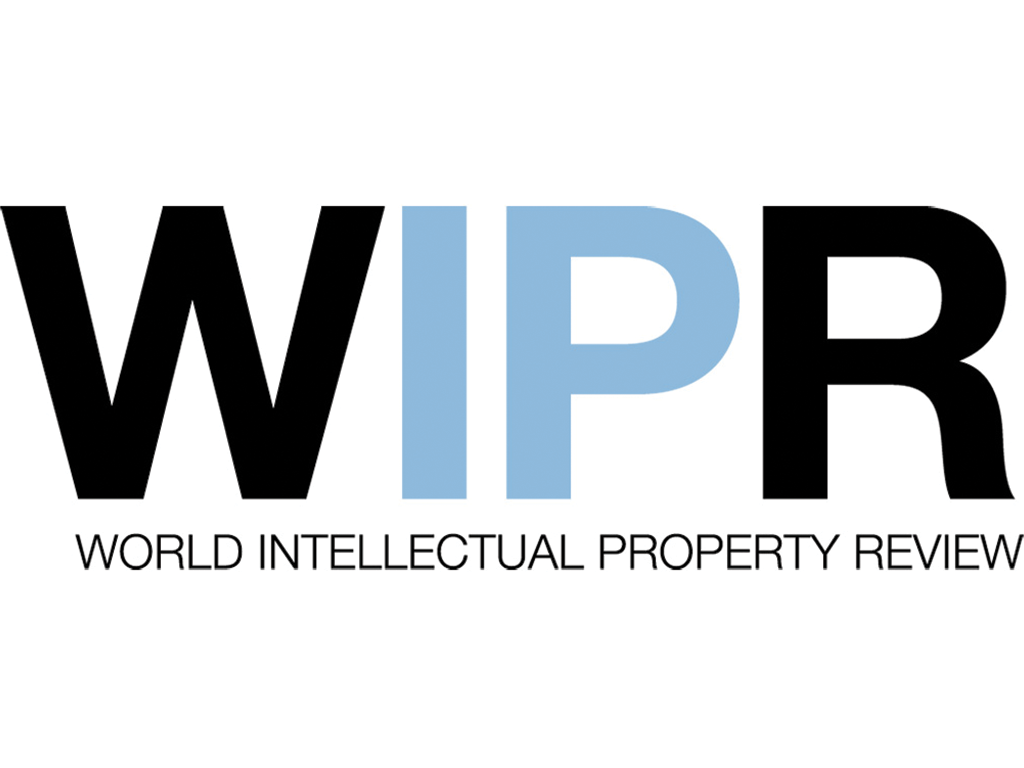 In the first of a three-part series of articles, Jayne McClelland, a trademark attorney at Syngenta, discusses best practices for creating, clearing and registering trademarks and her... Are you overpaying for trademark renewals?

Be honest: have you ever checked whether you are paying the correct official fees – not to mention competitive local law firm fees – for trademark renewals... Are you paying too much for trademark renewals?

Making sure that mark-ups have not applied to official fees, or checking that incorrect exchange rates have not been applied, has not been on the IP agenda for... Brandstock and WIPR together for WIPR Market Survey on Trademark Services

We are pleased to announce the collaboration with WIPR for the publication of the WIPR Market Survey on Trademark Services: 57 questions to industry experts to inform WIPR’s upcoming market... 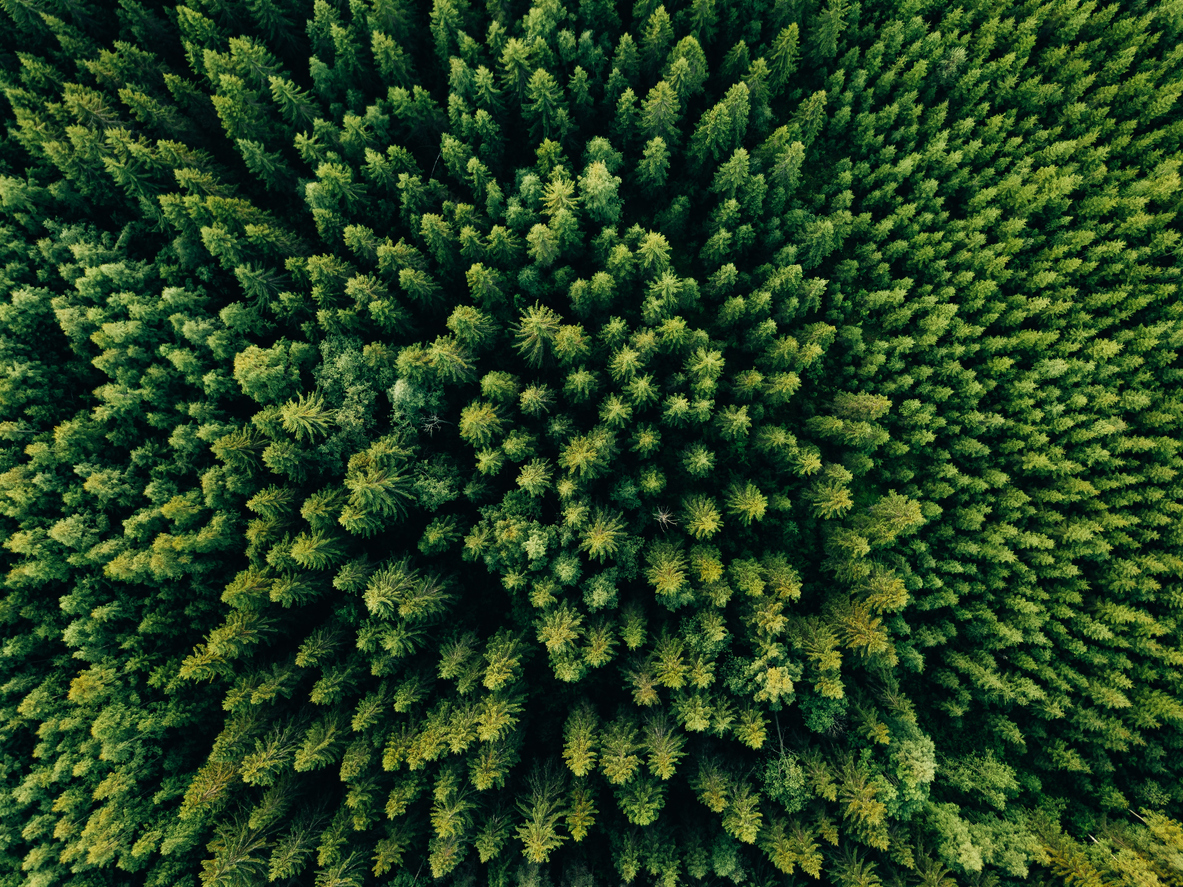 Brandstock Christmas Gift in Oxapampa: Walk With Us

Each year, we use more natural resources than we should. For this reason, Brandstock decided a few years ago to go paperless. This year, to make it more concrete, we have taken the Christmas funds... Brandstock is delighted to announce the expansion of its business in Europe with the opening of a new office in Switzerland. 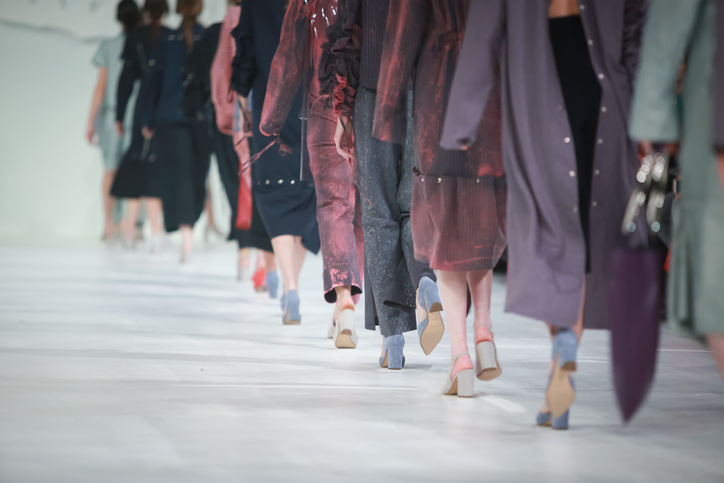 Brandstock is entering the world of social responsibility with Questel

Brandstock has become part of Questel Group. As many of you might know, Questel is an international Intellectual Property solutions provider with more than 5.000.000 users all around the globe....

Questel, one of the world’s largest intellectual property software and service providers, has signed an agreement to acquire a majority stake in Yoomap, a leader in open innovation software. Brandstock will be at 141st Meeting of the INTA in Boston

Brandstock is excited to join the more than 11,000 brand owners and intellectual property professionals headed to Boston for the 141st Annual Meeting of the International Trademark Association...

Brandstock is proud to announce that this month they were listed on the WTR 1000 – The World’s Leading Trademark Professionals 2019. This established research directory is the go-to resource for... 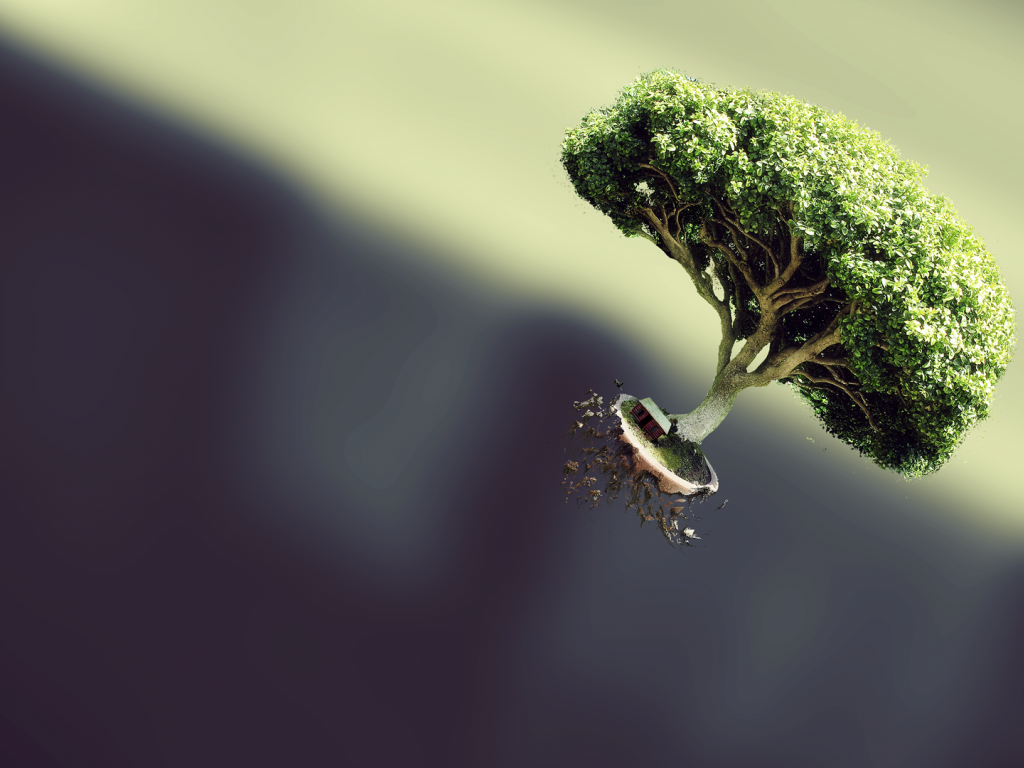 Do you know where to start with a recordals project?

Whenever a company undergoes a major change, IP counsel should think about whether any recordal and assignment work is required. Sometimes it’s obvious. If you acquire another company, there will... 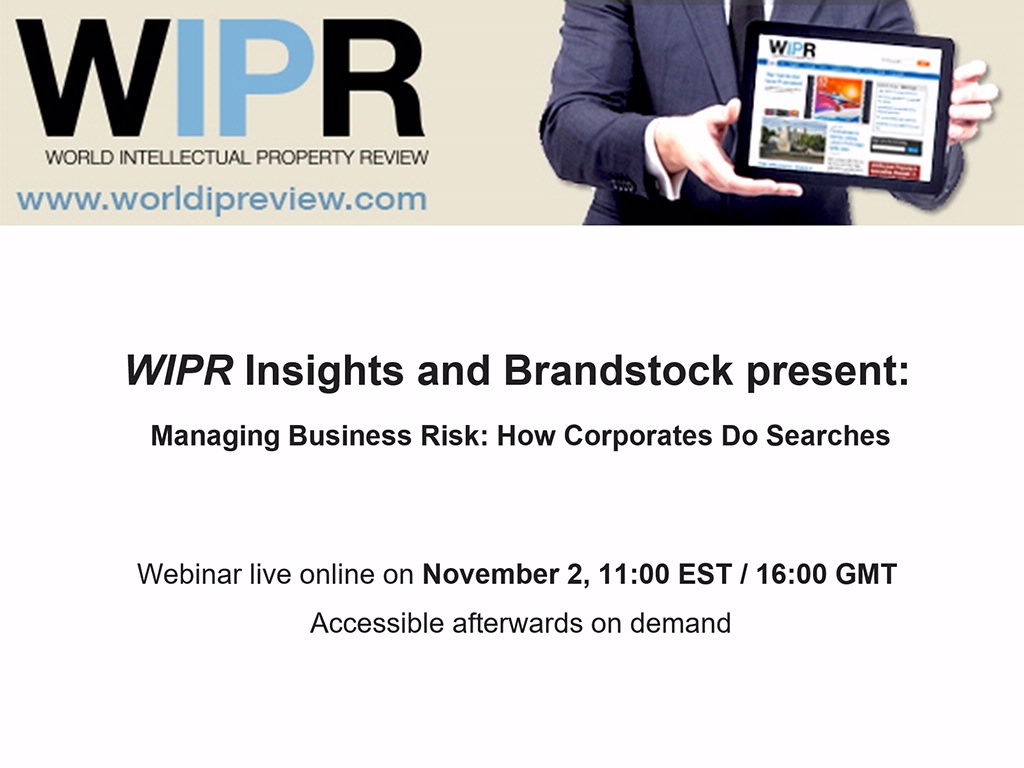 How corporates manage their searches with Brandstock 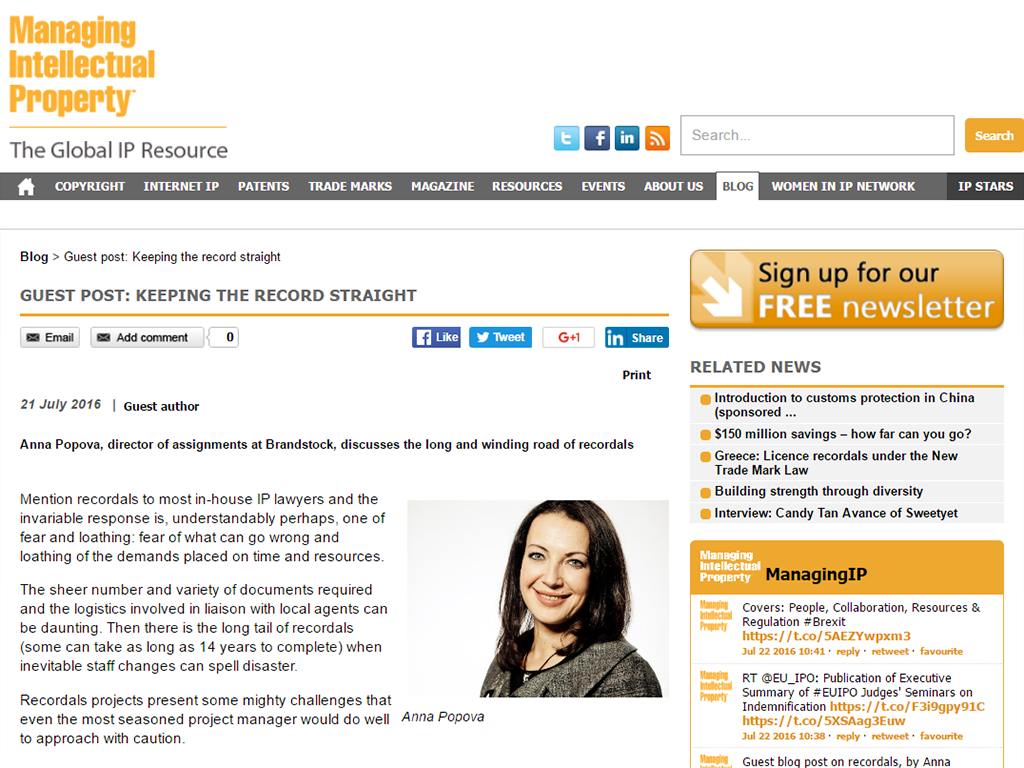 Mention recordals to most in-house IP lawyers and the invariable response is, understandably perhaps, one of fear and loathing; fear of what can... In search of the aesthetic

In the fast changing world of Intellectual Property, many more companies are now moving beyond the more traditional word mark protection to establish... 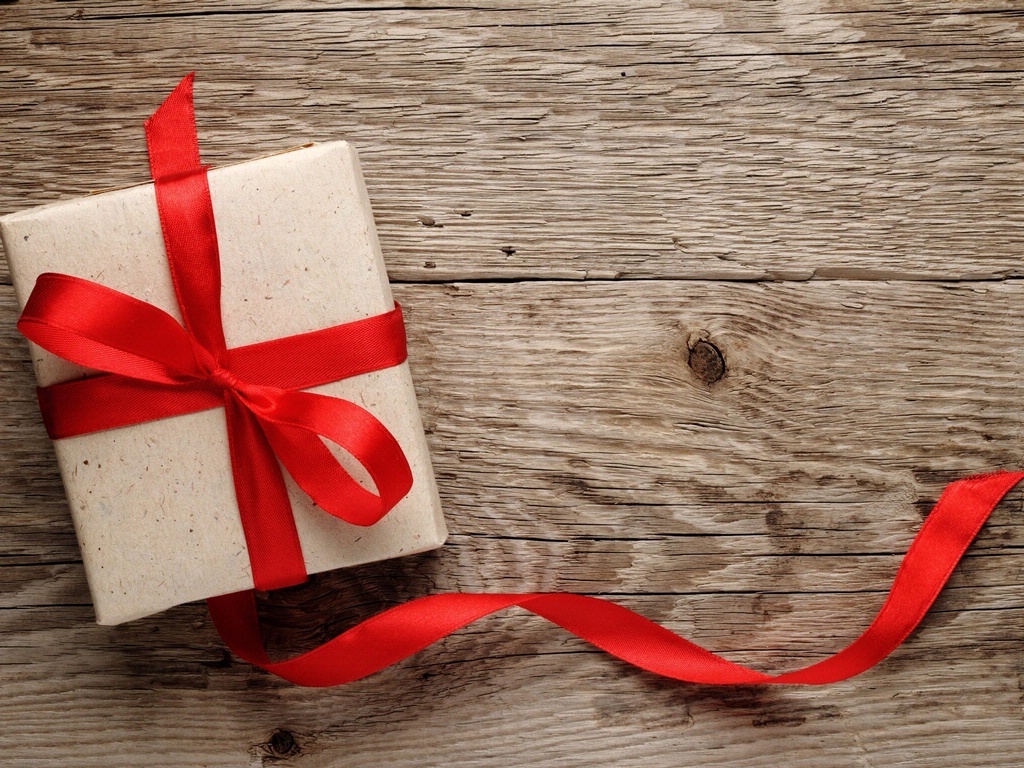 Mastering relationships is the key to lasting success Now’s the time to clean your docket!

One of the first this year should be to clean up your trademark docket and ensure you’re in the best-possible position to meet new challenges head on. Questel, one of the world’s largest intellectual property software and service providers, has signed an agreement to acquire a majority stake in Brandstock, an international player in IP Services. Savings: does outsourcing really save time and money?

If you have been thinking about outsourcing your trademark renewals to an external provider, there are a number of questions that need to be addressed reflecting the concerns that many trademark... Recordals – The Voice of Experience

Following on from our article entitled ‘Top10 priorities to consider when planning your next recordal project’ we are... We are delighted to announce that we have been joined by Alessia Lorenzini who has come to us from Nestlé, the world's leading...

Everyone - at least once in his life - has heard about “Black Friday”. Did you know it was a trademark? Such marks, which use has become more and more widespread, are subject to changes and... Trademark renewals: does outsourcing really save time and money?

When renewals are managed in-house, one or more people are needed to follow up with agents, set reminders, monitor deadlines, and so on for multiple marks in multiple countries around the world.... While trademark lawyers rarely share the same opinion, all would agree that to launch a new product or service without first investigating prior rights is to risk... We expand European presence with two new offices in Italy

Brandstock is proud to announce the expansion of its business in Europe with the opening of two new offices in Italy. What happens when a big corporation funds a piracy site? Why is outsourcing the best answer to the pandemic's questions?

What is the best way for corporates to justify to management that you need to spend money on IP at the moment? Are more companies outsourcing during the pandemic? What should be the primary...